Sunshine in the Alps :)

The day started sunny but cool, as I breakfasted and bid farewell to an excellent hostess.

My first stop was a BMW Motorrad dealer some 11km south. MARTINS were super helpful, providing a funnel for me to add oil to the bike. Plus they were able to sell me oil in a demi-pack, with a nozzle. JUST what is needed for topping up:)

I ran south for Innsbruck and the Brenner Pass. The day was perfect. Just south of BMW location I ran into this perfect setting….. 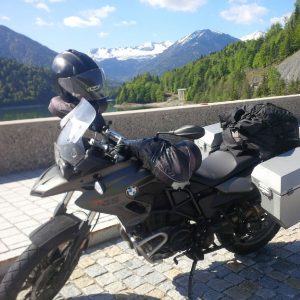 ……..and the vistas got better AND better. It was as if Mary Poppins had come to life and painted the countryside “Sound of Music”, only better.
The valleys were verdant, and distant peaks were capped in white. The temperature was low-to-mid 20’s (degC). Perfect 🙂
So perfect that I could have taken a photo every 2 minutes, so I took none.

The Brenner Pass arrived quickly enough, and I stopped just on the other side….. 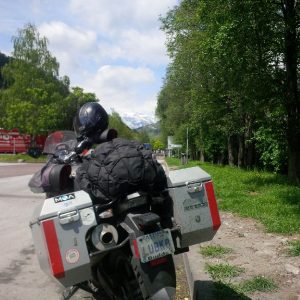 This was on the Italian side, and looked a bit tatty. But the prosciutto&cheese sandwich was awesome. And the staff were super nice.

I zoomed onto Bolzano, where I realized that I was done with highway driving. And that I was wearing too much. Bailed from the autostrada, and found a place to remove my jacket liner. Then popped over to the S12 and ran on down to Trento, which looked really interesting.
PS: Now I understand why people were speaking German to me earlier, when I filled up.

Took me a while to get onto the Rovereto , road which could be construed as me being lost. Though I prefer thinking of this in terms of exploring the city 😉

I explored Rovereto until I found the road to Vicenza. And what a road it was. Up and down through the Dolomites, as well as around the bends.
As the road climbed higher and higher, so the temperature dropped lower and lower, until it reached 11degC. I was thinking of putting my jacket-liner back on when the road started to drop. Oh great I thought. No need to dress-up.But then I noticed the tighter bends, and the ride became work. Blind bends. Hairpin bends. Blind Hairpin bends. It was hard work. The saving grace being the almost non-existant traffic. Mainly other bikers.

Ended up in Schio, where I found a place to sleep, and really nice people.

Unpacked. Cleaned and prep’d the bike, then went for food 🙂

Super was an excellent “spaghetti vongole” from Coralle……. 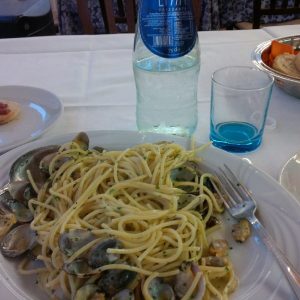 Washed down with “aqua mineralle frizzante” 🙂