From Berlin to Poland

Up early and on the road, taking in a couple of sights.
(1) The Reichstag or parliament building with the glass dome. Like the idea of an automatic sun-block in the dome
(2) Checkpoint Charlie, the focus of so many Cold War movies, and now a tourist trap 🙂

Then through the city and onto the Dresden road. The bike was running well. The weather 26degC. The roads were busy but moving. Perfect.

However, the temperature climbed up to 32degC.
Then when I crossed the border it was as if a washboard had replaced the road.
Then there were odd hiccups from TomTom, including taking me on a weird circle‎.
But I arrived safely at my hotel in the small place of Karczowiska, where a wedding party had just arrived.

The bride&groom had the traditional greeting at the door, then drank a shot each and threw the glasses over their shoulders. Everyone went in, the bride being carried over the threshold, and the party began.

I checked in. Nice room. But no wifi. Moved all my stuff over to a second room. Not so nice, but wifi works AOK. Guess I am a native of the 21st century. haha
TLC for the bike then shower and supper for me. See attached photos of beer and chicken cordon bleu.

In bed just after 10pm, which is why I am up at 4am writing this blog. hahaha
Maybe I should go for jog. Or go back to sleep. Decisions. Decisions.

ps: Leicester City won today and Jamie Vardy scored. How do I know? Not only did Nick‎ (the other Leicester City supporter in Toronto), let me know, but it made the news, here in Poland!!!

Sent from my BlackBerry 10 smartphone on the Bell network. 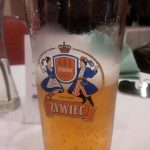 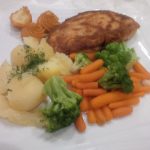