The ride to Casablanca was hard work. Still not feeling well. So took the paid highway. Good choice. My mind would wander, and I would need some water. Luckily the service stations were nearby.
After a couple of stops I felt well enough to have something to eat. Had a kebap….. 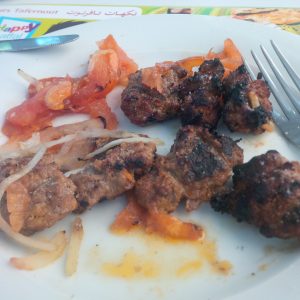 Headed back on the road to Rick’s Cafe 🙂
Found it easily enough.
Time for a hotel.
Found a Best Western nearby, and rode in.

After unpacking, I asked about the parking. No-one mentioned the on-site free parking, as listed on their page. Doorman took me to a yard where for 10, then later 20MAD the bike could be parked. Hmmmmmm. Back at the hotel’s reception, I was told that I could park in the same yard, then that it would be free, then that I could leave the bike in front of the hotel. Welcome to Maroc.

Left the bike in front of the hotel. Had a shower. Did some laundry. Went to bed.

Awoke just after 10pm to find that Leicester had beaten Derby to pass the next round of the FA Cup. Nice 🙂 Thank you Nick! (That’s the other Leicester City supporter in Toronto).
For those who do not know, the FA Cup is open to EVERY football team in England. So your village team could be playing Chelsea in the final, and win! Current minnows in the competition are from the 5th tier of football. So not your village team. But not on 500,000CDN a week either!

Checked to find that Rick’s Cafe was open till one in the morning. Yipee!

Stepped outside the hotel to find new doormen. They asked me to move the bike onto the sidewalk. I did that. And gingerly started getting off the bike on the “wrong” side. Yup. Not gingerly enough! Bike went over slowly. I don’t think I touched the ground. Doormen helped me right the bike. I put the cover on. Walked over to Rick’s Cafe, less than a kilometre away.

Two door men. One opening the door for me.
Inside, in the lobby, I was asked what I wanted. Just the bar I said. And was led to a really high bar.
Nice service.
Two mojito’s later, I was delicately slipped a bill. It was 1am, and I was the last guest in the place.
Now the place is nothing like the movie. However you should still go. It is an oasis of calm and good service. Lots of staff. Smartly dressed. Prices for the drinks were fair.

Walked back to the hotel. Scenic route. But I was only lost in the alleys the once.

Then back to bed.

Awoke early on Thursday morning. Debated whether to stay another night. But though Casablanca appealed to me more than Marrakech, I’d done all I wanted to do.

Went outside to move the bike back onto the road. Doorman suggesting I park in the small space between two cars. I was willing, though I did explain that the kerb was high and the angle not good, so I was probably going to hit at least one of the cars. I also explained that as I had my helmet, and was wearing my armour, I was happy to have a go. He backed off then. And just after that, a couple got into the big shiny Lexus and drove off 🙂 With all that space, even I could manage a high curb.

TLC for the bike.
Packed.
Then off to the Post Office. Wasn’t there. But my bike was when I returned. Doorman had rescued my keys :):):)

Settled the bill. Rabat was only an hour away. And it has an Archaeological Museum that is worth a visit. 58km to go, how hard could this be.

See you next blog;)