Not necessarily in that order.
hahaha

Andrew landed and cleared customs so quickly that we reached the car rental on schedule. Waze took us safely and quickly round the motorway constuction. Next thing? We were chez Barry.

Stayed long enough to drop the gear, pickup Barry, and get to a TA family day outing. Now this was a trip down memory lane, with quite a few old faces still recognizable 🙂

Thence to the Phoenix for a pint. Quite appealed to Andrew.

Popped in for a chat and a coffee with Robert and Eilene. Andrew could not quite believe the photos that I took with his camera. Am still trying to figure out if that is good or bad. hahaha

A curry. Andrew’s first.
Another pint at the Phoenix. Well it was on the way to the car. And as duty driver, I was drinking pints of water.

A stop at the Admiral Drake for some rock n roll.

And the souvenir bottle of port was drunk. Well it was only 4oz! And by now, we were at Toni’s home, so there were 4 of us.

The rental car was proving to be a challenge at night. The headlamps at “dip” had a hard cutoff to the area illuminated. One saw NOTHING after only a short distance.
So driving had to be slow in the country lanes.

But we made it safely back to chez Barry’s and sleep.

Sunday saw us all arise late.

Barry stayed home whilst Andrew and I drove to the Bat&Ball, home of cricket……..

Yes there was even a game on, to the backdrop of Hampshire’s rolling green countryside.
But my favourite part was watching Andrew carry a pint from the pub, across the lane, and onto the spectator’s area. Can’t do that in Canada!

Over to the Forest of Bere to meet up with Selena. Conversation extended into supper. Andrew pronounced his vindaloo dish “outstanding”.
Nice to have a curry house above a pub 🙂

Thence back to Barry’s.

Monday morning required a trip to the tip, unloading the hedge cuttings from Friday.

Then on the road and lunch at a nice manor house hotel in Weston-on-the-Green.

Suitably refreshed, we drove onto Leicester. Arrived at the apartment to find it untidy. A call to the landlord exacted a promise of a clean up.

We drove over to Paul’s for a cuppa and then to Middleton’s for a steak. hahaha. Was a “minute” steak……. 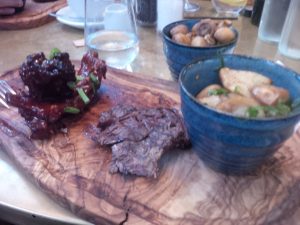 Bit of a walkabout.
See the king.
Drop Paul back at his home.
And back to find the apartment cleaned 🙂

Tuesday saw the sunny warm weather descend into the more typical misty cool morning, as we drove to Melton Mowbray.

No visits allowed in the stilton factory…… 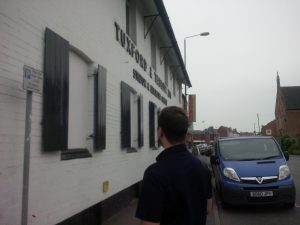 ….so we went to the nearby museum. Then into the town centre.

Purchased some items, including a roast pork sandwich with cracking 🙂
A walkabout in the market whilst devouring the sandwich.

Then off to Walter’s place in Corby.
A nice visit with tea and cake.
Walter had not seen his nephew since 2005, when Ola passed away.

Then onto June’s place, just the other side of Corby for supper. Which led to a stroll in the park. Which led to an invite by Ben (June’s son) for coffee……. 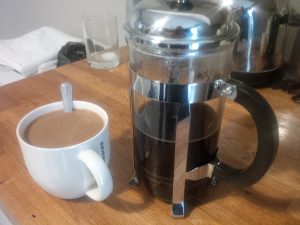 A good effort, but not up to the standard Chez Barry !

Back to the apartment in Leicester. And some planning.

We all so enjoyed meeting your Son Andrew for the first time. A lovely young man, you must be so proud!
I hope that You and Andrew had a good visit, albeit a little brief and somewhat impromptu, ie the “Call of Duty” experience! Oh, to be young again!

Or not, as the case may be.