Friday’s first stop in Valencia was BMW. Wrong one. This location only did cars.
Got directions and with a bit of help from NavFree, found BMW Motorrad. Parts department was closed till 4pm.

Ran on to the student accommodation that I had booked. Better than expected 🙂
One bedroom apartment. All mod-cons. Lots of room 🙂 May have to go back to school. This is luxury!

Unpacked.
Had free parking by the front door. But jumped back onto the bike and returned to BMW. Who did not have what I was looking for. Well not before Tuesday at the earliest.

Talking of waiting for things.
FirstGear responded to my query about the replacement jacket. It is on back-order. Expected ship date is Dec15. Yikes! This conversation started in July.
Fritz recommended Dianese. Has served him well, and over multiple years. So. I have a plan B.

Next stop a motorcycle accessory shop.
Nearly scored a new HJC helmet. Mine is getting beat-up. And the ventilation does not work. Riding around in 23degC weather will make you notice the lack of ventilation. However, they only had medium-sized helmets, whereas I need a large or XL.

Found an Aldi across the street, so picked up some supplies for supper.

Rode back home through Friday evening traffic in Valencia. I’d forgotten what is traffic. Been really quiet on the roads of Spain.
Plus the last time I rode in the dark, was getting back to the pub from Fritz’s.
Seems an age ago.
Early October.

Saturday morning up around 8:30am. A grey morning.
TaiChi.
Plan the walk to the beach.

Found the tourist info near Calle de Mer Egeo, on the boardwalk. As a passer-by explained, it was closed. Even though I checked on the tourist board site.
Still. There’s a lot worse that one could do then take a walk along Valencia’s beachfront in November.

For those in Toronto, it was colder today in Portsmouth, England!
Thought that might cheer up my Canadian readers. And give the Portsmouth crowd something to moan about 🙂

Meanwhile back in Valencia, it was 14degC and cloudy at the start of the day. By noon it was up to 17degC, sunny and blue skies.

I stopped by the Blasco Ibanez (Four Horsemen of the Apocolypse) museum.

Then onto the marina, where the America’s Cup qualifiers were held in 2010. Full of nice restaurants but they only do paella for two.
I trudged away disconsolate. But hey, had wine back in my rooms.
And the generous fates took me by a paella take-away, so I took home Valencia’s most famous dish……. 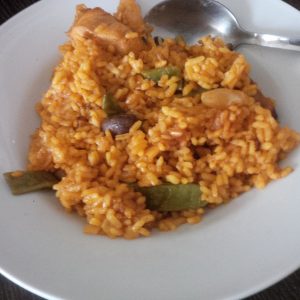 Oh Happy Days! It was good. And only 3euros 🙂
The bottle of sparkling rose-eh, was only 2.99euros.

Awoke after 7pm and decided to potter around. Sometimes it’s nice to stay in, when you spend all your time on the road 🙂

Sunday morning up and breakfast.
Pottered around.
Then around noon I headed out to see the city.

First stop was the arena. More commonly known as the bull ring. Take a look at and through the gate. Sure looks like a Roman ampitheatre to me…… 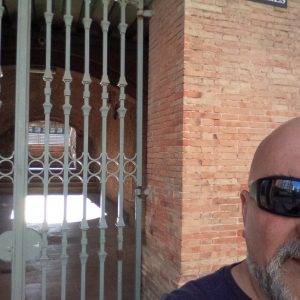 Then the cathedral.
BIG draw is the Holy Grail…… 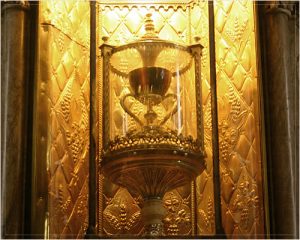 Yup. All those movies had it wrong. Rome held on to this from Peter (The Rock). Then a Pope sent it to Valencia for safe-keeping.

Afterwards I wandered through the streets looking at the architecture. Might have had a glass or two of vino tinto. Lots of opportunities 😉

Bumped into Vladimir’s shop. Good Polish lad from London! He sold me a man-purse. Not the “Goldilocks” version, but closest that I have seen. And I need one.
We had a good chat.
He’s also an artist‎. Yessy shows his work here …… https://www.yessy.com/art/?skw=ksieski

His shop is just south of these gates……. 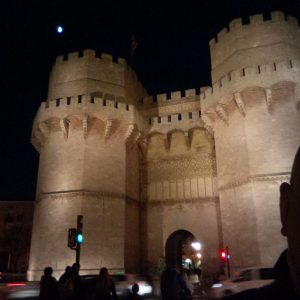 The bright light in the top-left is the half-moon in the sky.

A bit of a walk home, through parks and along nice wide boulevards.

Halfway home, I heard sirens. Then saw the masses of police and their vehicles.
Am sure everyone is thinking, major incident.
I was thinking footie game.
And I was right.
Loads of people in Valencia colours were going in the opposite direction to me.
For inquiring minds: Barca drew at Valencia 1-1, though there was a dispute about a goal not given.

Arrived home and had supper.
This cooking is hard work. hahahahaha. NOT!

And thence to bed, after updating my notes for this blog entry.

Up on Monday morning. Tired. TaiChi not helping. Maybe I should have drunk some wine with my supper 🙂

Went to reception. Booked in for another two nights. Valencia has lots to do. The room is great. I am enjoying all the space, and cooking. Plus I have some chores to do. And I’m not going to do them today 🙂
Am off to see the modern part of Valencia. With a stop at my new favourite cafe for breakfast.

Your wish is my command 🙂
The bag has one main pocket, zippered with a flap over the top. There is a small rear zippered pocket.
Size is 8x6x1.25inches (20x15x3cms).
Colour is black, with hints of blue.
Here is the bag on my laptop…… Mods:
Removed the magnet from the flap-clasp to prevent any issues with cards;
Removed the rear pocket zip to allow my BlackBerry to use the pocket without any scratching. Or for the zip to catch on my clothing, especially the mesh inside my motorcycle jacket.