Up before the alarm, on Tuesday morning.
TaiChi.
Finish packing. I had done most of it last night.
Pickup the bike. Only 30euros. Ouch. But dry and in good order 🙂

Ride back to the hotel.
Nice thing about Spain. There I am riding up a pedestrian area, via a pedestrian crossing, going against the few delivery vans, and the police don’t bother me 🙂

Load up.
Checkout involved just dropping off the room keys 🙂
Head out on a cool, but dry and sunny day.

Arrived at the dock via simplest checking process to-date.
Straight onto the boat. G2 area for parking. (aide memoire).
Hope the chaps parked at the bottom of the steep ramps weren’t bikers. Motorists would have no idea how tricky it can be riding down a steep ramp, and then executing a 90deg turn on a wet metal surface. hahaha

Parked, and started the tie-down process. Crew came over and finished the job.
Grabbed my go-bag. Walked to the escalators.
Then it all became confusing.

Deck 9 is one of those ” you can’t get there from here” decks. Had to undress after 15mins of wandering. The extra layers were not required indoors when walking. Way too warm.
Still. It became a hurry up and wait, process. Got to my room area and, there was a queue. Rooms not ready.
Undressed some more.
Had a nice chat with a Welsh gentleman, who was back from Portugal to visit his sons for Christmas.
Made me realize I’d missed Mykolyya! Oooops. And it was top of mind when I went into my room last night. Ol’timers. Ouch.

NICE cabin. Seems to have more room and storage than others.
Unpacked and setup.
Then went a wandering.

hahaha. This is a messed up ship. Maybe the Dutch built this 🙂
The layout is hard to figure out. Especially as I need to go down two levels from my cabin to the main deck with bars. And there is only one lift in one of the three stairwells that gets me back.
First stop was the store. No cigars, Literally. I was told “Not delivered”. Likely story. No cigar storage facilities in evidence. DLB’s.
Next stop was the Information desk to ask about opening hours. They did not have the hours of the restaurants and shops! So that’s an information desk that does not have information.
Went for more of a walkabout.
Found the hours of all the places. 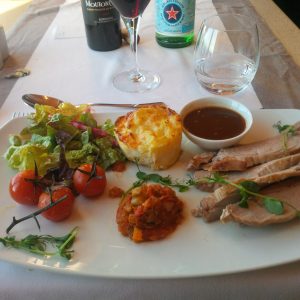 Followed by cheeses. One was nice.

Was going to see the magician, but he lost out to a nap 🙂

Awoke in time to find a seat in the aft bar, watching the sun go down, with a cup of Earl Grey.
This cruising is such hard work 😉

At 1830hrs, time for supper.
Smoked salmon on brushetta…… 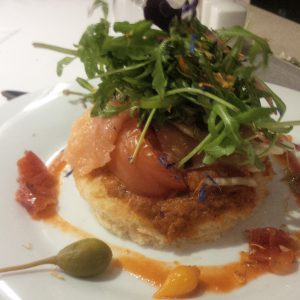 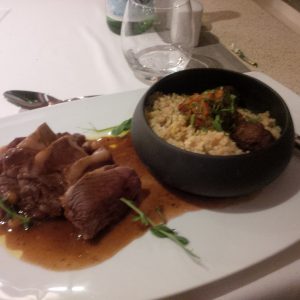 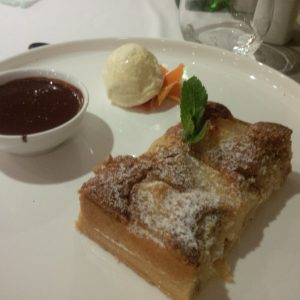 All acceptable.
However, am spoiled by the Michelin places! And even the 3euro paella in Valencia.

A cup of tea and a chat with a fellow biker from Havant.

Up early on Wednesday morning.
TaiChi.
Packed.
Walked down to my parking spot.
Nice chat waiting for the boat to start unloading.

Then up to Barry’s, in the drizzle.
Unloaded the bike.
We then went to Toni’s to re-attach her stove door (long story).
Then down to Southsea. Me to do laundry and see Robert and Eilene (nice Christmas tree).
Then meet up with Barry for a pint. Robert popped in.
He didn’t fancy supper, so Barry and I popped into the Balti House for a vegetarian curry. Then it was time for Panto.
Oh no it wasn’t?
Oh yes it was 🙂

Best part? Well, you had watch Sarah Spoilit chasing a chap in the audience called Chris 😉
Second best part? Twelve Days of Christmas song. You had to be there 🙂 🙂 🙂 Sarah Spoilit had to take off her wig 🙂

Popped into the Phoenix for a nightcap.
So did the Mummers.
Then the cast.
A good night was had by all 🙂

Then back to Barry’s.

If it stays cold then we will have a white Christmas. Snowed about 4″ last night with a few more to come today. Leaving the car parked for a few days.
And getting ready for our Christmas dinner with family & friends.
All the best to you and Barry too.

Thanks!
Same to you and yours!

ps: Boxing Day will be Panto 🙂