Up on Friday.
TaiChi went OK. Though in the words of James Bond “I feel a little stiffness coming on” 😉
Checked the bike.
Up’d the tire pressures. I had lowered them in Gela due to the type of roads and hills. Kept them lower enroute Noto. And Noto Antica. There is more grip. Especially on loose surfaces such as gravel. But now I was running along main roads, so up to the recommended max.

LOTS of traffic along the coastal route.
Ended up at a petrol station some 20km out where I filled up the bike. Rested. Drank water. Had a salami sandwich. Had been on the road for an hour and a half, in 29degC weather and heavy traffic. And it was lunchtime.

Rode on.
Ended up on a long, curved beachfront road, around a corner or two, and there was my pensione, in Taormina.
Chicken rotisserie next door.
Parked the bike by the front door and landlady came out. Took me to the garage. HUGE stone barn, where I parked the bike. It really was a better choice then parking in front of the pensione, which fronted onto the main road, with just a little space marked out for pedestrians. So not safe to leave the bike there. Felt unsafe walking, but I was never hit 🙂 Also, though the pensione was close to the old town, it was an unbelievable steep climb.

Back to the pensione and registered.
Choice of two rooms: 2nd floor on the road; 1st floor by the tracks. Chose the railway, as there was a proper table. And less stairs. Plus as kids, we used to listen to the coal trains. They were LONG. The whole house would shake. Gently.

Took a stroll along the coast.
Came back to the railway station bar, where I had a rice-ball, red wine, bottle of water and espresso for 5 euros. Tip included 🙂

Had a nap.
Did a few things.
Then out for a stroll.
Other direction. The way I had ridden in. Along the beachfront. This time with the sun going down, and the lights coming on.

Stopped at a likely restaurant.
Took the Sicilian starter…… 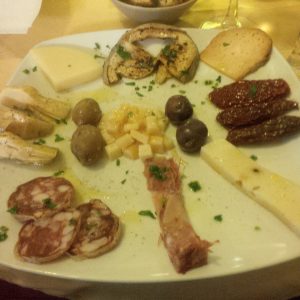 Followed by a half decent steak.
Ending with a long chat. Nice Chilean couple, who are heading to London. Might have been a grappa or two. And an invite to visit Santiago😉

Waiters around the world should spare a thought for those working this strip. We were sat in the main building, on one side of the main road. Across the road was a patio, set on the beach. All restaurants had patios across the road, with waiters having to dodge traffic all night long. Quite extraordinary.

Saturday morning up for TaiChi then breakfast.

Caught the bus into the old town.
WOW! Worth the price JUST to see the bus going up the twisites. Add in the backdrop of Mount Etna and the Mediterranean. Wow.

Old town was nice. Small and hilly, once you strayed off the main street.
Nice view from the gardens…… 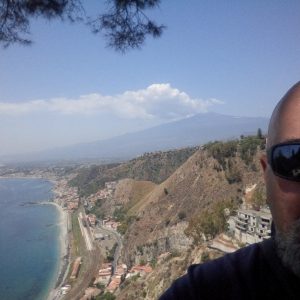 Back home.
Nap.
Catch up on my blog and skip supper. Funny that I’m not hungry 😉

Sunday another glorious day.
TaiChi showed a few more bumps and bruises. But in the healing zone now.
Took a long stroll.
Scored sunscreen without benzene products. Replaces the sunscreen that I had from Logrono days.
Meandered back via gelato on the beach.
Then picked up a salami lunch.

Had a nap.
Started planning my ride to Napoli.
Out for supper. Vongole at same restaurant as on friday.
Back home and finish chunking my trip into possible day rides.

Monday up for TaiChi and a final breakfast.
Loaded the bike.
Bid farewell to Taormina. Nice place.