Up on time Saturday morning, to TaiChi, breakfast and TLC for the bike.
Asked Natale(my host) if there was a goose in the backyard, but it turns out that the honking is a big toad. hahaha.

The weather was perfect as I set off. 25degC. Blue skies.
As I ran down into the plains, the weather became hot again. 30degC and sunny.

Ran onto Paestum Archeological area.
Parked in the “motorcycle area”, and had a bottle of water and a gelato.
Next stop was the museum. Really impressive jig-saw work, putting the vases back together.
Next stop the two main temples (various names)…… 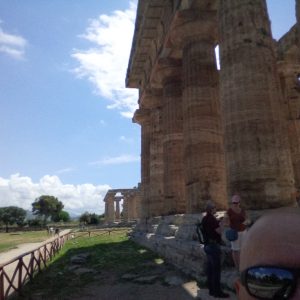 Then a walk through the whole area.

I might be a little done on the ancient buildings front.
However,I would like to know how they built the stuff. Especially as the temples have REALLY big stones.

My recommendation?
Go to the Michelin Plate restaurant. Food will be good and NOT too expensive. Their patio backs onto the two main temples. The heck with wandering around in the heat. Comfy seats. Good food. No washing up. If I had to do it again, Nettuno would be my choice 🙂

Rode onto the B&B.
TomTom assumes there is a divided highway where you turn onto the B&B’s road. Weird. Well maybe. TomTom has been getting most things wrong in southern Italy.
Today tried to send me down a hill, then onto a left turn, back onto a road I was already on.
And in the last few klicks of Paestum it was trying to send me right to a roundabout, and then come back. But I just turned left, where I was allowed to.
My mantra now is to follow the traffic, or the signs, and let TomTom catch up. If nothing else, it keeps me on the paved roads. hahaha
Seriously, TomTom seems bent on sending me down unpaved roads.  ‎Last one was on the way to Lecce.

At the B&B the mother spoke zero English. But we communicated. And I scored appetizers!
Serge (the son) came along and recommended a restaurant. He was doubtful that it was open. But TripAdvisor was positive that it was open. Guess who was right?
So I picked up some munchies enroute home. No way I was going to ride to the restaurant for 8pm.
Quite right too. Fell asleep around 9pm