Thursday morning, I woke early.
TaiChi.
Pack.
Pocolito breakfast.
Retrieve the bike.
Alex helped me bring my luggage down.
Said our farewells.
Rode out. Ignoring TomTom till I was out of Alex’s part of town. Useless Dutch programmers were trying to send me the wrong way. Lucky that I knew the area.

Favourite memory from this trip? Being called a “Neopolitean”. From a local, driving his Beemmer, based on the way I parked, and moved my bike. High praise indeed!

Rain started shortly after I rode out. Luckily I had chosen to pull over beforehand, so dressed in comfort.
Temperature ranged all the way from 27-to-12degC. With and without rain. The cooler temps were from climbing up into the hills.

Three and a half hours later, pulled into Sulmona.
Birthplace of Ovid, whose works I had to study. Preferred Catullus and Lucretius.
The “happiest days of my life”, as school days are referred to. The happiest times were spent in an Italian cafe! Who knew 🙂

In town, I parked.
Found a B&B.
Rode over and scored a primo parking spot.
Too early to book in,  so went for lunch. 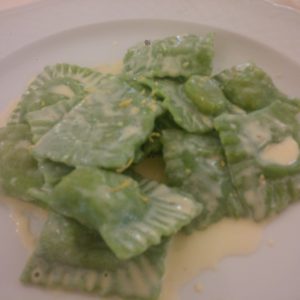 Back to the B&B to check-in, and unpack.
Fell asleep. I think the lack of siestas in Napoli have caught up with me.

Awoke to see Saudi Arabia start well against Russia, and then conceede a goal at 12mins. Russian team looked bigger, fitter and stronger than the Saudi’s. Left for a stroll. Did not end well. Drat. Was hoping that Allah Ahkbar.

The walkabout was nice.
Met Luciana (mine host) by Ovid’s statue 😉

The walkabout took so long that Clemente was open for supper. Coincidence? 😉
Appetizers (vegetable lasagne, caneloni, and stuffed mushroom missing from this picture)…… 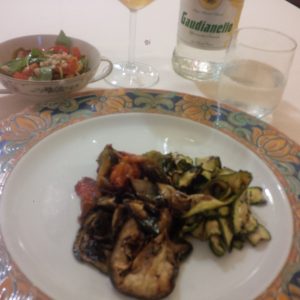 followed by a mixed grill…… 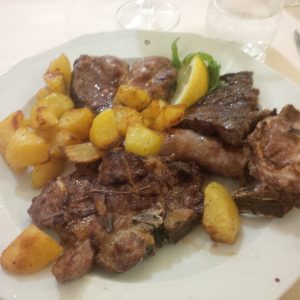