Thursday up to pickup the bike.
Heppenheim BMW did a wonderful job, again 🙂
Feels funny riding with both hands at the same distance from my shoulders. The handlebar was bent a long way back, on the right-hand side. I did ask for the left-hand side to be bent back, matching the right. haha. Gives a more laid-back riding stance. But, the more I ride this bike, the more sense the original design makes. Now, after 6 weeks of riding in a particular position, am having to re-learn posture 🙂
The bike also has a new clutch. All new rear brakes. The frame, suspension and exhaust given proper TLC.
Bike’s great 🙂
DANKE SHOEN to everyone 🙂 🙂 🙂

.
.
Spent Friday sanding and painting the Jesse Luggage frame. Was still slightly bent, with a weld spot, and very rusty. Figured that a can of “tremclad” would help protect.
Gave some TLC to the boxes too.
Work was interrupted by…..
– the heat
– the other Canadians. My how they do like to drink 🙂
– same tribe from Oz as last year 🙂

.
.
Saturday off to see Nigel and Margaret. Nice cup of tea, lunch, and a chat 🙂
HUGE rain of biblical proportions as we were sat under the awning. Started around 5:15pm (as Nigel’s app predicted), then paused around 6pm.
I dressed and ran home. Rain stopped some 5km later. Sun came out. I began to warm up. Around 50km later stopped to fill up, and remove my rain-trousers. Placed them under my cargo net, as usual, and carried on.
Back home in Heidelberg, no trousers! Could not believe they blew away. A hint that they needed replacing?
Am going to miss those Toadz from FroggToggs. Seen me through 3+ years of rain, hail and ice, plus one major fall, with the help of 3M duct tape.

Had a beer after giving the bike some TLC.
Did some thinking about where to go next.
Then an early night.

I headed to ZRM, a motorcycle shop. Found a pair of rain-over-trousers. But. Sunday shopping rules are strict. You can touch, but not take home. Germany is a godly country. And I do believe, that even retail needs a day off!
Had a nice chat, and a tea.

Shopping ended, I headed the rest of the way to Frankfurt.
No hotel booked, so headed into the centre. Found an ace parking spot in the shade. Took out my Toughbook, and found a place to stay. Turned out to be 600m from my location.
Filled up the bike, as best to have at least a half-tank of fuel. Protects the pump and filter.
Then rode to the hotel. Booked in. Found the hotel parking. Had given the bike TLC along the way. So just cleaned the front shocks and put on the cover.
In the car park, chatted with Swiss-Paul, riding a 1200GS. He’s actually Portugese.

Unpacked.
Then out for supper at the nearby Cafe Maingold.
An excellent time with the white dip (spicy/garlicy cream smoked-cheese). The other dips were good too…… 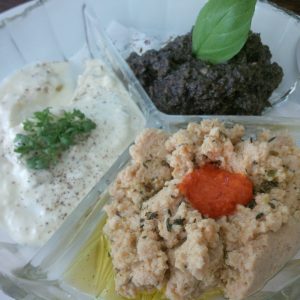 A couple of pints of Apfelwein, which took me back to my student days. Ah, scrumpy 🙂

After supper, took a stroll, down to the river, along the south bank, back across the river through the city centre…… 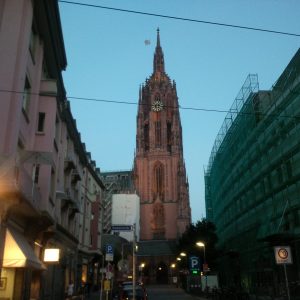 .
.
Monday morning up and off to visit a couple of motorcycle clothing stores.
Nothing that compares with the Toadz.
But saw more of Frankfurt. And the countryside.

The next stop was the Klassikstadt. Only museum open! Well, it is a Monday.
This place is a converted 4-storey warehouse. Now stores and sells supercars, of all ages. Like a candy store for grown-ups. Checkout this number plate…… 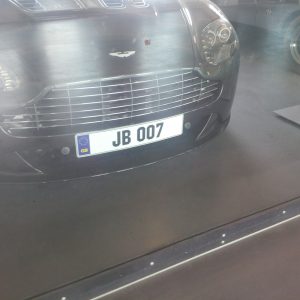 There is also an OK restaurant…… 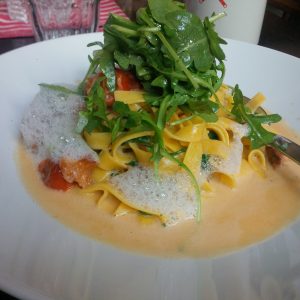 And if you find it, an excellent espresso bar!
How much for all this? Entrance and parking are FREE!

Riding home, I found another motorcycle gear place. Nada. They only have some cheap and nasty designs.
Am missing my Toadz even more. Boo! Hoo! They were good, though not perfect. But still better than the best seen so far. Which were the Held Tempest, seen in ZRM.

Back at the hotel, thought that I may stay another night, but no room 🙁
So packed and went for a traditional Thai, across the street from my hotel…… 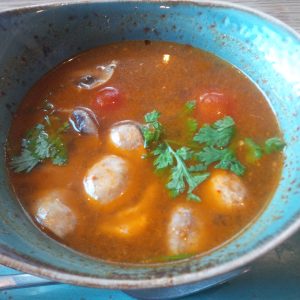 Then back to Cafe Maingold for dessert. No picture. Think chocolate brownie, chocolate, vanilla ice-cream, whipped cream, and red currents.  All in a huge soda glass.
Cannot imagine why I am still my Canadian size! hahahahahaha

.
.
On Tuesday, up before the alarm.
TaiChi.
Pack.
Load the bike. Included a nice chat with a Chinese family, off to Mercedes in Stuttgart.

And run to Leipzig.
Did you know, that even in the hot sun at 40degC, if you run at 155kph, it’s not too bad.
NB: Still drank >6 litres of water, throughout the day.

Nice part of today’s ride? Found a pork hock at one of the service stations. Even had crackling 🙂

In Leipzig, found my hotel.
Parked.
Had two beers. Needed to replenish!
Checked in.
Unpacked. Got a free upgrade 🙂

A short stroll to the ‘Ohne Bedenken‘
Sat in the bar. Had enough of the outdoors for today 😉
The evening spent with four small Gose beers.

Another Thai soup, back at the hotel.

Have decided to head up to Estonia. HOTE: If you haven’t, then do read Tom Clancy’s “Command Authority“.
After Estonia, will ride down into Ukraiina.
Over to England. Another reunion 😉
Back to Heidelberg/Prague.
Then Canada.

Assuming the bike is OK.
The last part of Tuesday’s ride was a challenge. The bike would stall at the most inopportune moments. My suspicion is that the heat is frying the electronics. Disappearing areas of the display are my indicators. Even my Toughbook’s operating range stops at 45degC. And that does not have an 800cc engine creating heat under it.
So hopefully, after a cool-down, by Wednesday norning the bike will start and run AOK.