So I pulled into Hagen as a way to stop, for a night enroute to England. I stayed for 3 nights. Nice single room, en-suite. No TV. Nice buffet breakfast. All for a reasonable amount.
Will take the boat from Holland.

Not much to say about Hagen. It is on the outskirts of Dortmund. Has at least two theatres. And a bus service that start at 4am and ends before 9pm. Hardworking people! 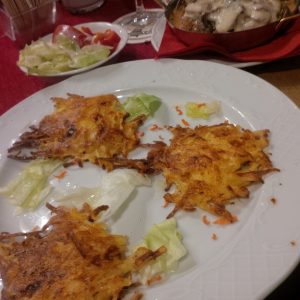 The rosti were excellent.

Second day on a walkabout found Hoa Wok. Fresh food, cooked right then and there. Plate full of tasty stir-fry for 5euros 🙂

Third day I was up late, as I had reviewed my options last night. Up for breakfast, then back for a nap 🙂
Good timing. Had rained all night, and carried on through the morning.

The rain stopped, so I went for a tramp in the woods. Started as a random walkabout. Then at one point, I could have walked along a busy road, or taken a chance through a wood. Took the wood. There was a trail that turned into almost visible muddy paths, steep bits, and fallen logs. Fun 🙂

The woods ended in a country lane that took me downtown. Went looking for sausage and sauerkraut.  Had spotted the OctoberFest listing yesterday, so popped into Spinne and had sausage, sauerkraut, mash, and spam…… 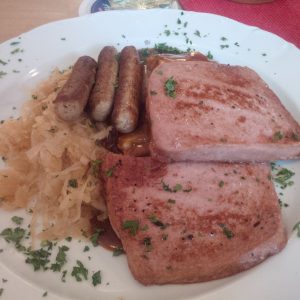 Sauerkraut and mash were good. Breakfast sausages were OK. Spam, is still an aquired taste.
All arrived so quickly that I suspect a microwave was used 🙁

Wandered around a bit more, found the theatres, but nothing on this evening.
Then went back to Hoa Wok.

Walked home via a gelato.

.
.
Awoke Friday.
TaiChi.
Pull the motorcycle out into the sun, to make sure the cover is dry.
Breakfast.
Pack.
Loaded up the bike, whilst answering questions from a bunch of kids on a school trip.

Zoom-zoom to Amsterdam. Lots of traffic and white-lining for the last 100km.

Arrived at TomTom HQ and asked for an update to my gps. TomTom update stopped working on WindowsXP this year. Their HelplessDesk suggested I buy a new laptop. Seemed easier to swing by their office. And it seemed that I was not the first.
The nice young gentleman at reception said I was at the wrong building. Started explaining, but I stopped him. Gave him my gps, and asked him to enter the destination. Took a while. Turned out, my TomTom gps does not know the name of the street which has their Customer Service building. haha. You cannot make this stuff up.
Also, TomTom did not know about the construction going on between the two offices. Looks like it has been there for most of this year. So I rode off in the only direction available. Figuring out the route as I went. Might have been a cycle-path or two.
Found TomTom Customer Support.
Guido ran the update for me. Only took a couple of hours to do in the office. Record time 🙂

With an updated gps I rode off to find the Dam. TomTom knew nothing of the roadworks. So I saw lots of the old town. Lots. It’s just like the movies! Bicycles everywhere, and I mean everywhere! Resorted to running along my own ad hoc route until TomTom caught up. And here I am…… 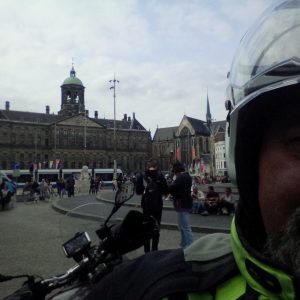 Next stop my hotel in IJmuiden.
Got out at what seemed like the begining of rush hour. No stress.
Found a great parking spot.
Checked in.
Booked my ferry to England. Will be in Hull on Sunday. Quicker to get to the old homestead from Hull. Go figure. Probably because it is downhill? 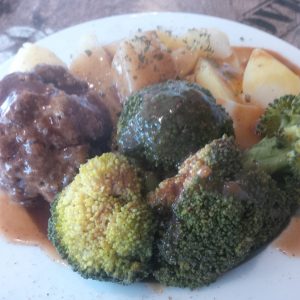 A long walk to catch the sunset over the North Sea. Harbour looks busy. Turns out there is a major refit yard here.
And lots of Heineken. Pity. Still. Real beer on Sunday.

ps: did my bit promoting the Elvis Festival to Danie. The receptionist and a huge Elvis fan 🙂