Last off the ferry at Heysham, but that was OK. Needed to find a post office, so not following the traffic.
Mailed some postcards. Those going to Canada will take some time as the rotating strikes are still happening 🙁

Looking for the post office led me to a cafe that had a nice chill-con-carne.

Then off to the Lakes.
Zoom. Zoom.
And the weather sunny and 10degC. Nice for November 🙂

TomTom missed a road blockage. This caused about an hour’s delay. which in these days of early nights, is worrying. However, the route was scenic. Like riding in a Lawren Harris painting. A fair trade.

Found my accommodation. Actually two buildings on opposite sides of the road. Different names. But the booking used both names.  Decisions. Decisions.
Made the obvious. After I stopped laughing, Walked into the nearest door and asked.
I was in that building.

Unpacked and gave the bike some TLC. Then did some research on Scafell Pike.

Work done, time for a beer. After all, there was the Strands brewery on-site.
Young Patrick showed the barman how to loosen a sparkler. (Dip into hot water) This enable me to sample all six beers. All were good!!! Only their flagship “Emmmm” not to my taste.
Lots of chat. Good chat 🙂
And a bit of excitement. The wind picked up, and I had to tie the motorcycle cover down.
Could have walked across the road and tried a different six beers, but went for a nice beef pie, with a glass of porter.

Sometimes, everything just comes together 🙂

.
.
Tuesday up, full breakfast and off to Scafell Pike.
Took a while, as I stopped for a photo…… 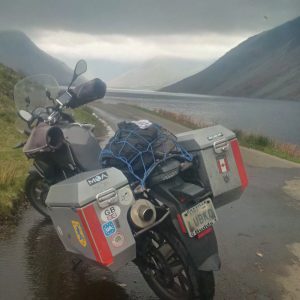 Stopped again in the woods of a car park, where I found good chat. 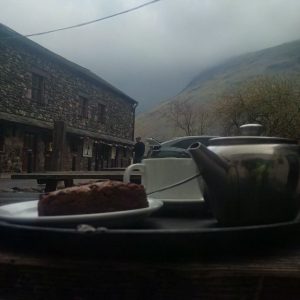 Apparently this is the normal state for Scafell Pike. I know. I checked with two likely lads, who had just descended. They had been atop Scafell Pike many a time. Always misty and damp. The mountain is somewhere in the cloud. hahaha

Rode around to fill up and visi‎t Muncaster Castle. At the castle had a sandwich and a tea, and rode off. Castle building closed for the season, except for the garden, and the birds of prey on certain days.

Back, via a scenic route, to park the bike.

Started on paperwork, but not for long. Went down into the bar for a PROPER, and REALLY good barley wine…… 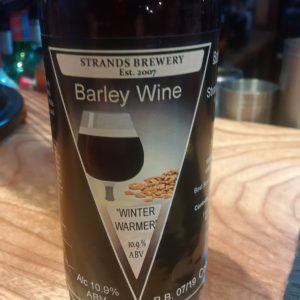 As per yesterday, had lots of chat, and supper.
Feeling even more at home.

IMHO this is the best part of the Lake District 😉

.
.
Wednesday morning up to TaiChi and rain.

Good day for paperwork. And there was a lot. Have been remiss. Used to do this every week, but can get away with once a month. Only trouble is, takes longer.
Took all day. Included updating my contact dB, and downloading my emails.

Lunch (really good carrot/swede/stilton soup and a sausage sandwich), then supper (nice salmon) were my only breaks.

.
.
Thursday morning up to TaiChi and the biggest breakfast so far.
First Parade on the bike, as I had let some air out for my Tuesday ride-around.
Pack. Including some beers 🙂
Rode off. Weather trying to be nice, but failing every now and then.

Arrived at Preston BMW. Time to check the brakes, but no room till later next week.

Next stop, Stu&Vini’s.
But that’s another story.