The weather was damp or sunny. Seemed unable to make up it’s mind. All the way to Llysfaen.
Found a good chippy in Llandulas.
Found the Conwy micro-brewery in Llysfaen. They’d moved in March from Colwyn Bay. Have a cute bar on-site. Picked up a couple of brews to try later.
Found the Plast camp, NOT!!!!!! Must have set TomTom incorrectly. Had not stored tabir’s location in MyPlaces the last time. Ooooops

Rode into Llandudno, looking for the excellent place from 1984. Long story, for another time. Found a newer, posher hotel in it’s place. Michelin plate sticker, so the food should be just as good. But no-one at home 🙁
By now it was 4pm, raining steadily, and getting dark. So I booked a cheap place. Just as I was putting my phone away, staff turned up. Found that the original owners were long gone, and the staff were not impressed with my second choice for a hotel.

Rode over to the second choice hotel. Didn’t like the car park, so used the continental motorcycle parking method 😉 TLC for the bike, and checked the fluids. All looked AOK, despite the little bit of highway zooming that I had been doing this past week.

Supper at a nearby chippy, and an early night.

.
.
Tuesday morning up to TaiChi.
Downstairs for a full-English breakfast. Had asked for some items to be removed from the standard set, as I did not want a big breakfast. But they doubled-up on the remaining items, so breakfast was just as big!!!

Rode straight to tabir. Found the place neat and tidy, except for the power-lines. A crew was in the process of replacing the poles. Which would account for no-one being home.
Still, took this selfie at the spot where I would stand, on parade, as a “de-zur-ni”…… 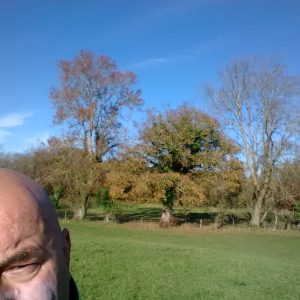 Next stop, Sheffield. Two reasons: Get away from the bad weather moving into the western side of the UK; and I’ve never been to Sheffield. But I do have cutlery that was made there 🙂

Sunny all the way.
Found my accommodation.
Checked in.
Perfect room for a single traveller. And no TV. That is a real plus in my book. 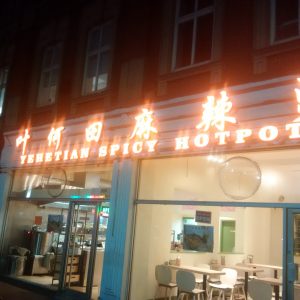 This is a do-it-yourself spicy, very spicy, soup. You select your ingredients. They weigh them, charge you accordingly, and cook them in a spicy broth. They then bring the hot-pot to your table.
For newbies like me, there are a few set dishes that you can order. I had the vegetarian option. It was good !
Warning: the broth is spicy! But if you are like Barry, you can add more chillies, or peppers, to make the hot-pot even hotter!
I just added garlic.

Took a stroll by the cathedral…… 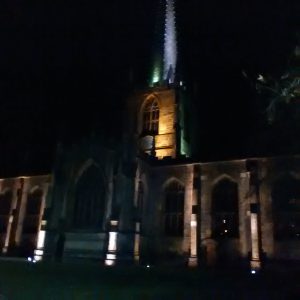 Checked the theatres, but only one show playing and it was Gypsy. Not for me. So had an early night.

.
.
Wednesday morning off to do laundry.
NOTE: Breakfast is a small yoghurt, some fruit and museli 🙂

Found some useful items in the Co-op, next to the laundry. Then wonders, of wonders, at the key-cutting shop was told that in Doncaster, I could get my TomTom key cut. Called to check, and was told “YES”!!!

Picked up some duck tape, cheese and sausage enroute home. Repaired my motorcycle cover with the duck tape.

Planned my ride to Doncaster. Ate the cheese and sausage.
Then went out for a stroll. Which included a small order of chips. Not sure if I could handle a second bowl of spicy hot-pot.

.
.
Thursday, up to TaiChi, a healthy breakfast, and off to Doncaster.

Pulling into the city centre, some 200m from the key shop, a red warning triangle appeared on my dash. Found a convenient motorcycle parking spot, and checked the manual. The bike was overheating.
Checked the coolant, seemed a bit low. So found a shop selling a litre of it. Another shop for a funnel, and topped up the resevoir. Didn’t take much.
Ran the bike whilst filling up, and for a few more minutes. Looked OK.
Rode out, but the bike was overheating again. So before the red warning triangle appeared, I pulled into a nearby car-park.
Looked over the bike. No visible leaks.
Checked the oil. Just over MIN, but that is still plenty. On the dipstick, the difference between MIN and MAX is 100ml, and the book states that an oil-change requires 2,900ml.
Waited for the engine to cool, and topped up with coolant. An even smaller amount went in. Ran the engine, and after a few minutes, the temperature exceeded the mid-point again.

The nearest BMW bike dealer was in Rotherham. But they could not organise a tow. They suggested the AA.
Found the AA web-site, and there is a big button on the front page, to initiate emergency service. I had 3 goes at trying to navigate through the IVR system, and failed each time.
So I called the RAC. A simpler IVR system, but then I was placed on hold. And this was to discover if they would come out to pick me up.
I was not too far from York and my friends at Barrie Robson. They had fixed my puncture in Bridlington. And done a service the following year.
An hour and a half later, the young lad had my bike in the van. And a shorter time later, we were in their new shop (just across the road from the old shop). Prognosis was an air-lock in the cooling system.
The boss dropped me off near my B&B. And I settled in.

Supper was a curry, that was nice, but no-where near a proper one by Stuart.

.
.
Friday up early, two sets of TaiChi and despite ordering a smaller breakfast, found there were 3 eggs and two sausages. Should have done more TaiChi!

Hopped a cab to the shop. Bike declared healthy again. Passed along my Conwy beers. Rode out.
Rode around York for a bit.
Rode a bit further out, ending up in Harrogate. Which had LOTS of traffic.
All in all a great test for the bike. Back to it’s normal self 🙂

The weather was foggy. Glorious country-side, with golden-leafed trees, swathed in mists. Autumn can be magical in the UK. This morning was magical. And if I hadn’t gone to York, I would have missed all this.

Rode down to Leicester. Had called Paul yesterday (and lots of other people), whilst waiting for my tow. However, Paul had called me back to say he needed some help with his father’s computer.
I arrived at Paul’s place, just as he pulled in from work. Timing is everything.
We had a chat, then visited a local Chinese take-away for supper. We ordered a set menu for two, but there was enough for 3, and maybe 4! Spring rolls were home made, and HUGE.

After all that food, it had to be another early night.

.
.
Saturday morning up to two sets of TaiChi. More chat then off to visit Paul’s father (Jack). The three of us headed out to a carvery for lunch, then back to work on the computer.

Turns out that Jack was a victim of social engineering. He showed me the invoice, from what he still believes was a real company. It is not. Sad to say, he had given over control of his computer to these people and they had installed a nasty virus. When I booted up the computer, the message complained about the ‘CI.DLL’, and Windows would not open. The fix is to boot from disk, but in this case, the virus blocked that too.
Please, if you see a pop-up on your computer, that asks you to call, DO NOT CALL that number !!!!!! Disconnect from the internet, and scan your computer for any virus and malware. Nobody from Microsoft is EVER going to contact a you. Only a bad-guy will initiate a contact. And they are very smooth.
By the way, Jack is not the first person I have seen call a bad-guy. You don’t have to be old, nor dumb, to be fooled.

Paul had passed along his laptop to Jack, so I set about creating a LIMITED account for Jack, and making sure he could get to his email and Skype.
I also installed CCleaner. Highly recommend this software. Even the free version is VERY useful. You can control what applications run everytime you start your computer (there are a lot of unnecessary apps). And you can remove all sorts of junk left behind by regular browsing.
Took 7hrs, to do the above.

Enroute home, Paul and I picked up some wine and supper. Should have picked up more wine, then we would not have drunk the scotch. hahahahahahahahaha

.
.
Sunday up late. TaiChi, then off to Jack and setup OpenOffice.
Jack belongs to a club and collects the weekly dues. He’d created a template in Word on his old computer. That is stuck in virus-hell.
Installing OpenOffice was easy, but using it was tricky as I am used to Excel. Managed to to create a new template. Then had Jack modify the template to learn how OpenOffice works. At least for the basic commands. We printed a few samples. Job done.
I also setup his YouTube account to open automatically as a second tab, when he opens his browser.
And sorted out his email filters.
This took only 3hrs.

My parting advice to Jack was that if ever he sees a pop-up, take a photo with his phone and forward it to Paul. And wait until Paul gives him instructions. Paul had to show Jack how to do this. Am hoping that with Jack having a limited account, it will restrict the damage. Because I am not 100% convinced that Jack understands.

Paul and I went back to the Chinese take-away and picked up supper. Didn’t go for the set menu, as there are still left-overs from Friday! The soup was really nice 🙂

Then caught up on the blog.

Ow man … still having to do tech support! That’s really the only thing I want to “retire” from, I would keep the rest.

I guess … if you really expand on Zen and the Art of Motorcycle Maintenance … it’s all part of it, really.

Once a year, is like a trip down memory lane.

And support keeps IT real. Pity most places have separated development and support.