Departed Swansea on a drizzly day. First stop, a tin mine. No Welsh cakes, so left sans refreshment. Luckily had a full breakfast this morning 🙂

Rode on up to Merthyr Tydfil, which did have coffee and Welsh cakes, in the old Town Hall. I am finding those small cakes, a cross between a scone and a pancake, quite more-ish. Swansea market had fresh ones, which luckily came in fives.

Had been a scenic ride, and continued to be so, despite the rain. Swung by the Big Pit, but that was harder to get to from the railway station than expected. And I’d already visited a mine museum.
So rode on, through Pontypool and into Caerphilly. The cheese is long gone, but there is an outstanding castle. Took a momment to view the moated castle, and look for a place for the night. Ended up in Cardiff for the night.

Outstanding to know that Barry has a lane named after him, in Cardiff…… 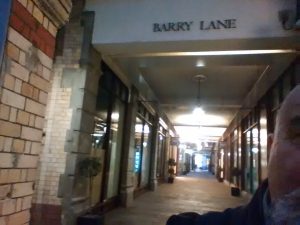 🙂
Walked around looking for a parking spot. Ended up seeing much of the downtown, and parking on the street, nearby, in a motorcycle spot.
During my walkabout, I spotted Giovanni’s, where I had the proper Italian treatment, and this excellent rissotto…… 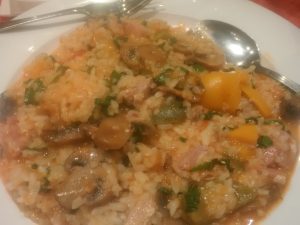 .
Next day I moved the bike back to the hotel, away from the power-washers of the street cleaners. Don’t know how the other bikes fared. My cover had quite the splatter.
TLC for the bike.
Packed and off to Chepstow. Having coffee plus chat with George.

The chat took me to Monmouth, and the Punch House hotel. Found the hotel by riding around, and walking into a likely spot. Beats using a website. And lots more fun 🙂

Nice hotel, and a nice town. Took a walk-about, including this famous bridge…… 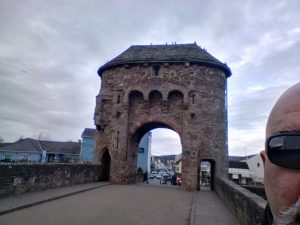 .
Wednesday was a PERFECT BIKING DAY. Sunny, 18degC and no wind. Ran up to Hereford and popped into the cathedral.
Then up to the Red Lion at Weobley. Pub was gone, replaced by a curry-house. And the church was taller than I remembered it. Nice chat with the gentlemen taking care of the church. Including a Canadian, born on Vancouver Island !

The day was still nice, so I took a random pub in the hills, at Craven Arms, which is a funny spot. Small, but with all the trappings necessary for a traveller.
Including a nice steak in the pub, though well done.
And a good chat with bikers. We are everywhere 🙂

.
Thursday took me to Upton House. Bit of a ride, along the back roads, but nice. TLC for the bike when I arrived. And a request to move the bike a little, so that car drivers do not knock it over. Nice to be taken care of.
Liked the house, especially the basement, the wood-panelling and comfy chairs within the fireside alcove. With a bell, and an internal phone to call for Jeeves 🙂

Into High Wycombe where I am staying for a few nights.
High Wycombe has a few nice pubs, which educated me into the world of beer pumps. Not as visible as sparklers, but giving a similar effect of whisking the beer. A properly drawn pint leaves a lacey pattern on the glass, whereas the beer pumps leave a spotty pattern. No wonder I have been confused by some of the beers.
On a happier note, Hassan (receptionist) directed me to an excellent tandoori at a Taste of Punjab.

.
Why High Wycombe?
Well, I have never been here before.
And, this coming Sunday sees a motorcycle meet at Ace Cafe. Just an hour away. The meet starts at 9am, and am planning to be there. It’s an Overland & Adventure meet. Vendors as well as bikers will be there.