On the Road Again, Again

So May begins, with zero overheating problems. Time to get back on the road.

Bit of a problem. A case of too much of a good thing. ACF50 was doing a really good job for 6mths keeping TomTom functional. However, the rain had crept in. After Coburg I opened the case to allow the internals to dry. Next thing, apply ACF50 again.
However, I think I over-did the spraying of the internals. TomTom works as well as ever (haha), but I cannot see the display from front-on. The more acute the angle, the more visible the display, but then you are looking at the map skew-wiffed.
Audio works. So if I am travelling slowly I can understand the directions. At highway speeds I can just about hear that something is being said.
All these challenges, just because the motorcycle gps stopped being waterproof.
Looking up on the web, I found more riders had this "bloom" problem. And across all TomTom models 🙁 Apparently there is a design flaw that lets water in where the case meets the screen. And the last thing you should ever do is send the gps back to TomTom for them to fix, as it takes an age, and doesn't work.

First stop the Bavarian town of Hof,  for laundry. Located the place, then found a nearby hotel. Old-fashioned hotel in the best senses of the word. I  was way too early for getting my room, but took the time for lunch. Had the newbie serving me this nice lunch….. 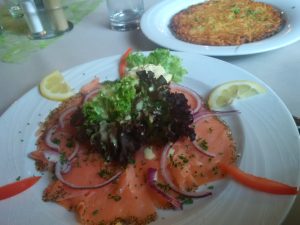 Ah but it took me back to when I was a young waiter 🙂 Serving wine, and silver-service, was easy-peasey, but not the first day 🙂
After lunch Hotel Strauss booked me in. Nice organised room.

Unpacked.
Opened up TomTom to dry out the excess ACF50.
Then off to the laundry.
Had a couple of hours, so walked through the town centre. Nice.
Picked up the laundry and back to the hotel.
Reorganized my clothing, now that it is all fresh.
And so to bed.

Next day ran towards Stilgenbauer, just in case the bike needed more work.
Found a random spot with a nice hotel. Stayed for three nights. Had things to catch up on.

For one, MagicJack discontinued support for WindowsXP. Another company happy to discard paying customers.
The upshot? I gave my monies to PC-Telephone. I do need to be able to call Canada from Europe. And whilst 'Three' (my UK phone) charge only pennies a minute whilst in England, it's $3/min in Europe. Ouch.
PC-Telephone took my money, and their software installed really well, though I did not receive my PIN#. Waited. And at the end of my stay, sent them a query. Seems a bit strange. Especially as the last software I saw this slick was WebEx in 2011.

Other thing to catch up on, was route planning. Had lots of choices, and decided to head south, and then on through Austria.

.
Tuesday was Matej's father's funeral. He did well to survive the stroke. And passed away peacefully in his sleep five years on.
My chalet for that night had a bar, and I raised a glass to the memory of the Green Dragon 🙂

Next morning after the most ridiculously huge breakfast for one person…… 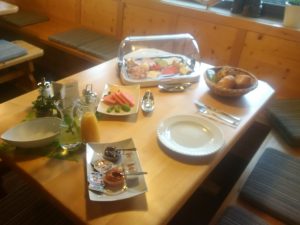 ……I headed into Austria.
Taking the back roads guaranteed scenic views.
Plus a long delay, where a cliff face was being fixed.
Was a tiring ride, so stopped off in a random spot, on the southern Austrian border. This "saved my life". When you are tired, you make mistakes. On a motorcycle, that can be fatal. I needed to stop. And when I did, found I was more tired than I thought. A bowl of nice goulash soup, a salad, and coffee set me up.
Took out my laptop and booked a hotel, just across the border.
Headed out all better. Crossing into Italy the temperature plummeted to 4degC and misty. Bad roads added to the challenge. But, I was all hale and hearty. Even when the rain started, with the rush hour traffic. All was good.

Arrived at my nice hotel.
Parking was underground. Being Italy, the floor was tiled. OK for the bike, but wet boots slipping and sliding.
Missed supper. Had mis-heard the receptionist.
But I watched Tottenham pull off a come-back against Ajax. That's how nice a hotel it was. Has the pay sports channels.

By now, some 1,500km since the new oil-cooler, I had turned the routine for checking on the bike, into a set of habits.
At every stop, eg: to fill up, I check the radiator is all hot. A hot radiator means hot liquid is touching that part of the radiator. In other words, there is coolant.
In the mornings, I take the radiator cap off, and check that at cold the radiator is full of coolant.
Then, I top up the coolant expansion bottle, as needed. Topping up is tiny, and apparently only to replace spillage.
Which is really good news.
The oil which started looking brown and watery (not a good thing), is now looking normal-ish. A good thing.

Took a look around Bolzano. TomTom does not understand this city, so after 45mins of random spots, including a car-park, I ran for Milano.
Sunny. 19degC. And picture-perfect Dolomites.

Pulled off in Bergamo for a late breakfast.
Found a hotel.
Headed towards Milano by the Monza circuit, and into my hotel.
Had chosen wisely. Host is from Brazil, a biker, who used to work in London. Makes really good thin-crust pizza.
I was led astray by mine-host, and a young lad from Rome who is just back from living/learning/working in Japan. Added a new drink to my repetoire:Amari. Excellent evening.

.
Friday morning up to a lovely continental buffet.
Checked the bike. AOK 🙂
Headed out for a couple of errands, then the Moto Guzzi museum. Highlights?
(1) Aussie racers helped put Moto Guzzi on the map.
(2) Saw my Sevilla-bike-brother's Nevada bike, in the same colour. https://www.motorcyclenews.com/bike-reviews/moto-guzzi/nevada-750/1991/
(3) An Alpini, cappella, bike and all, showed up. I should have taken a photo, as even this on the 'net does not do the rider justice.
Without the tour, the visit takes less than an hour.
NOTE: The museum only opens 3-4pm during week-days.

On the way home I was a little peckish. Found a fruit shop. Next door was a salami/cheese/bread store. Rode south till I saw some green. Got lost till I found this perfect quiet spot for a sandwich…… 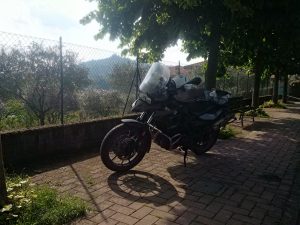 Back home, I scored a really nice steak…… 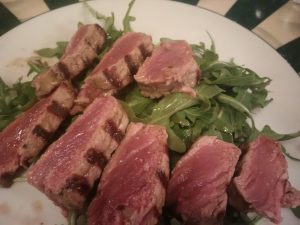 .
Saturday up, breakfast and off to San Pellegrino Terme, home of my favourite spring water. Place has seen better days. Well. Da Vinci visited, so hard to top that.
The Grand Hotel is undergoing some work, but still shuttered up.
The funicular is shut down.
As is the original water shop, south side of the bridge from the hotel.
On the other hand, the bottling plant is HUGE. Basically starts as you head north out of Zogno, and ends at the roundabout announcing San Pellegrino. Has to be a kilometre.
A couple of espresso's, chat with a wise young Nigerian, light lunch of tortelli, and headed home.

Reprised my fruit and meat purchases, but the clouds were turning very dark. Stopped in a petrol station and dressed up. Perfect timing. Rain started, but I was under shelter.
Ran home, and the sun came out. Hot and muggy. And me wearing 3 layers.
Put the bike to bed.
Had my sandwich.
A nap.
Then to work, updating this blog.

To summarize:
(1) the bike has 2,150km without overheating. Not even a hint. Not even in traffic and 22degC weather. I have used about 200ml of coolant, instead of a litre. And even that I suspect, is mainly due to removing the radiator cap, and spilling coolant.
(2) TomTom is becoming almost visible, and I do have a plastic bag handy to cover it in case of rain
(3) my new voip phone works. Thank you PC-Telephone
(4) the English Premier League ends tomorrow (Sunday, May 12th), with Jamie Vardy the leading English goal scorer 🙂
Now I can get on with my chores.

Which should prompt you to say "What chores?"
To which I reply "Amari di Capo"
😉

ps: you may have noticed the absence of proper links and photos. WordPress 5.2 is having problems with both. Will add when I can.

pps: a plug-in, ‘Move Comments’ Version 2.4 by Apostolos Dountsis appears to confuse this latest WordPress. I am guessing that because it alters links (in theory only between a post and a comment), it affects all links. But it was OK with the earlier version of WordPress. In those immortal words, “We are all doomed. Doomed! Doomed, Mr. Mainwairing.”