So what does one do to celebrate?
I was already well on the way. The sun was shining, skies were blue, and the temperature was 17degC. Poor people in Toronto have snow 😉
In my short-sleeved shirt, I walked over to Ikaro.

Took a seat facing the glass-walled kitchen. There are more chefs per customer than even at Statlander‘s restaurant.
Looking at the kitchen served to remind me, how I miss Lemon Meringue and their Chef’s Table. Best seat in town. Best seat ever!

Back to the present.
I took the suicide menu – ten courses, plus five glasses of wine (pairings), lots of water, and some bread. 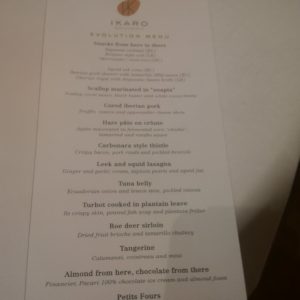 Trust me. It was a stretch.
My 9am breakfast was an orange, some nuts&raisins, and a cup of green tea. Lunch was at 2pm.
It was still a stretch.
But as a way to experience everything, perfect.

Round01 – a sweet and tasty aperitif, followed by delicate cod on crispy skin, and finishing with a tiny perfect tuna taco.
First wine paring “ne a mea gusto”. Like a bad chardonnay.

Round02 – a tiny, perfect scallop handroll, followed by a perfect piece of grilled pork, and finishing with a chorizo “soup”.

Round03 – a plate of scallop slices in a coral sauce. This plate went back clean. 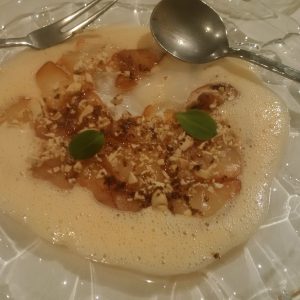 Round04 – Iberian ham, with truffles, “chips” and cheese. Nice 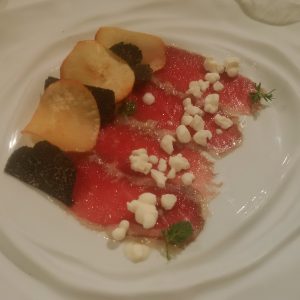 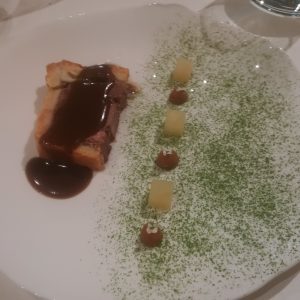 I am the chap who hunted for pies in London.
This was a wild hare. Not out of a farm. It was shot – there was one left in my slice 🙂
Third wine paring was a similar red to that above, with a bit less body.

Round06 – Carbonara style thistle. The thistle stem was crunchy, though the bacon bits and pork popcorn made the dish outstanding 🙂 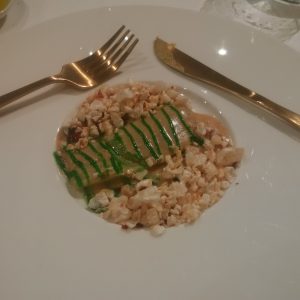 Round07 – Leek and calamari lasagna, where the calamari took the place of the pasta. With ginger&garlic cream. Plus jus from the ink 🙂 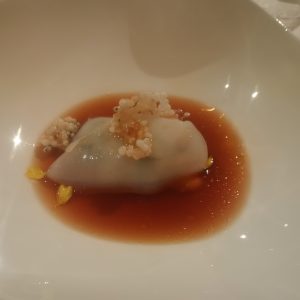 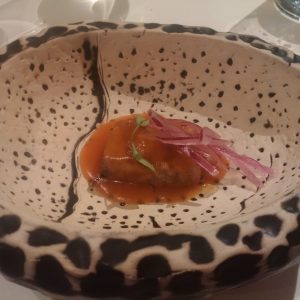 Round09 – Turbot in plantain leaf, with plantain fritter, crispy skin with drops, and peanut fish soup. Disappointment. Bone in the fish. Fishy taste over-powered the bland soup, the bland fritter and the bland crispy skin. 🙁

Round10 – Venison sirloin, with a chutney and crispy piece of bread, was perfect 🙂 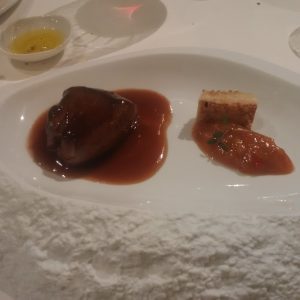 Fifth wine paring was a red Tempranillo. A tad “bright”. The Romans really spread this wine throughout Spain.

Round11 – Tangerine ice-cream with nice little touches, was OK. But I am a Haagen-Daz man.
Somehow a Pedro Ximenez appeared. It was lovely.

Round12 – Petits Fours with an espresso.
All that was missing was “a wafer-thin mint“. hahahaha

Quite the nice way to spend two hours.
Staff were excellent.
Chef came out for a chat.

Took the long route home.
By now, it was 18degC.
Didn’t loose any calories. Had another espresso, and a “chupito”. hahahaha

Freedom from what exactly? I assumed freedom was a major component of the last six years……or am I wrong.

After all that food and drink? Am guessing freedom from six-pack abs?