Those Romans!
They were having ‎a tough time taking over the Celtiberian populace from Numancia. So they built a wall around the city, and starved the city into submission. Submission applies only to the population that didn’t commit suicide. Romans enslaved the lot that gave up.
Romans did that a lot of that. Kill and enslave.

Numancia is a hill-top site. Fair amount of excavation, and a few places rebuilt to give a sense of what the city was like. Including a piece of the Roman wall.
Here I am, with one of the city houses in the background…. 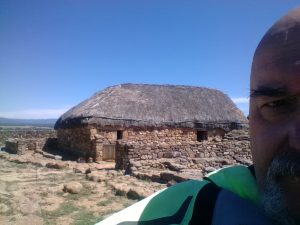 .
Numancia is just north of Soria, a city I visited quite some time ago, which included the Numancia museum.
Today was an excellent ride south of Logrono. Sunshine all the way. Highway ride till the right turn into Arnedo (a major shoe centre), then all gentle twisties, until Garray when the hill-top site becomes clearly visible. Free entry.
Glad I brought along a flask of water. Thirsty after I had been on the road for a couple of hours. At the site, so little shade that I wished for a hat. After the tour, more water to drink.
Rode gently out of the car-park: gravel surface and in-coming cars to manage. Then home via the N-111. More green, gentle, twisties.
Lots of rivers in this part of Spain carving roads just for bikers 🙂

Popped into Yoshi for my “Menu Dos” to take home. Had a cold fizzy San Miguel whilst waiting. Was a relief to take all the armour off, and turned out that I was hungrier than I thought.
Breakfast had been an espresso and a glass of fresh squeezed orange juice at El Pato.

So the bike has had a good run – keeping the battery topped up. And giving me another refresher. Been my third ride since the lockdown, and still forgetting kit, or how to organise the kit. Nothing major. This time I forgot my face-cloth for cleaning the helmet visor. Last time I forgot my sun-screen until halfway through the ride.

Need to be “ride ready”.
Looking to ride to Greece. Ideally to Cyprus, but that is a bit tricky at the moment. Appears only possible to catch a ferry from Turkey, and then you are stuck in the northern half of the island. Cannot cross to the southern half.
Well, at least I should be able to get into Greece.

Glad to hear that you’re on your bike again riding the twisties.