Saturday evening, popped into the kitchen for a final cuppa before having an early night.
You know that feeling when something seems wrong, but you cannot at that moment think what it is. Then you look again, and realise. Something was wrong! The sink was full, and overflowing! 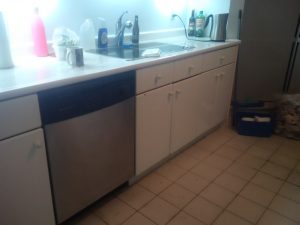 AaaaaaaAaaaaaAaaagh!
One call.
Two calls.
And the third call was the trick. Louie came in and departed quickly, returning with a wet/dry vacuum‎ cleaner. Sink emptied, and floor dry-ish. Then Louie beavered away trying to unplug the stack (out-flow mains) to no avail.
Louie and I managed to keep the water-level below the sink tops, until the water was shut off for all the condos, above and below mine. Louie again cleaned the kitchen of the water, and most of the debris that looked like shredded parsley.

Next step, two chaps came over to find out‎ where the water had gone. Their measurements located one piece of drywall that was damp, so out it came. A dehumidifier and air-cleaner came in, and started making noise. I was assured that this would dry-out the damp patch in the office carpet.‎ As well as ensure all moisture no matter where, would be eradicated. 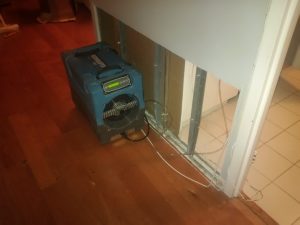 Still no water in the kitchen. And nowhere to cook.
Luckily I had my thermos of tea‎ so, settled down to a cuppa whilst watching the rest of my movie, before going to bed.

The movie and tea finished, there was a knock on the door. Louie stood there with two plumbers. ‎Their rod was longer than his. Things should be pushed through shortly.
Two hours later, including Louie getting the plumbers back when a subsequent test showed an issue, the kitchen had working water and drains.

Louie came back sunday afternoon to check.
All AOK‎.

Next steps will be to check on moisture levels, and clean the kitchen again, focused on the floor under the appliances.

Then sometime later, the drywall will be fixed.

So far, my losses have been a new box of tissues. Victim of some sneaky water that ran down the inside of a cabinet door.
And missing out on eight hours of sleep.
Hopefully, it will stay that way.
Tuesday, another check.

Why my kitchen sink?
First in line.
All those below, are on another stack.

ps: Happy ending? Leicester won 3-0 today, rising to third in the English Premier League. Vardy scored and earned the assist on the other two goals 🙂