Well, that was unexpected but nice. If you support Leicester 🙂

Reads like a movie script after Salah scores for Liverpool at the 67th minute.
Leicester gets a penalty or just a free kick?
Then was that a goal from Maddison’s free kick, or no goal?
Followed shortly by the Liverpool goalie crashing into his own defender, leaving Vardy with the ball and an empty net.
With a third‎ from Barnes, to seal the win.

All together now, “There’s only one Jamie Vardy…….”
As the team rises to second in the EPL 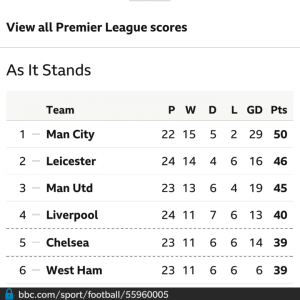 How I miss the Football Factory!
Could have had EggsBenedict with a cuppa, and watched the game with all the Liverpool supporters.