Only this Long in Canada?

Set the Garmin gps for Timmins.
Riding out of Sudbury I stopped to take a photo of how many kilometres to the next turn: 269km, or 167miles. 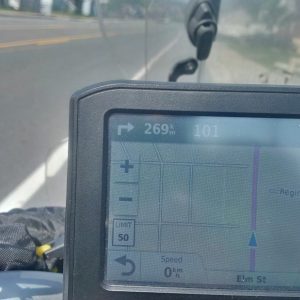 Cannot remember ever going, anywhere, in the UK, for that distanc‎e, without making a turn.

If you are interested, the RAC lists the top three longest roads in the UK. www.rac.co.uk/drive/advice/know-how/longest-roads-in-the-uk/

The A1 is the longest road in the UK @ 637km, which pales into insignificance when compared with the 7,821km Trans-Canada Highway. ‎