First of the Day 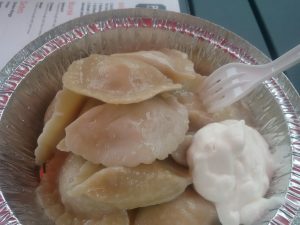 Home again.
Home again.
Jig-a-dee-jig 🙂
That was a nice portion of vareniki with kapusta 🙂
Purchased at the Bloor West Ukrainian Festival, which runs thru’ Sunday, 2022Sep18.

Back with the arts portion of the festival.
There are 3 stages, on Bloor: Timertay on Jane; Community on Runneymede; and Busking, in between. I walked between the three, catching a variety of acts.
There might have been coffee and pampushok.

Then the Sturks ping’d me and I ended up with them at front row centre. Perfect timing.
The evening show was great. Full range: dance; opera; traditional songs; quirky (sand painting to music); and a current star from Ukraiina.
How current? All the kids, knew all the words, to her songs. She put on a great show. This video does not do justice to the performance she put on tonight. But it is the song the audience asked for in the encore……
https://duckduckgo.com/?t=palemoon&q=jerry+heil&iax=videos&ia=videos&iai=https%3A%2F%2Fwww.youtube.com%2Fwatch%3Fv%3DYujzhGdUIFE
NB: One more to my list of Music and Ukraiina.

Jerry Heil poured her heart out tonight. She is using music to fight Putin. Jerry asked that we all do what we can to support Ukraiina in her hour of need.
NB: Ukraine is in a tough spot. Russian forces occupy 20% of her territory.

What can YOU do?

Contact your MP. Tell them that Russia needs to be declared a rogue state.

Here is a template……

In 1991, August 24th, Ukraine declared it’s independence from the Soviet Union. In a December, 1991 referendum, 92% of Ukraine’s voters agreed with independence. Something Russia has tried to reverse, politically, and now militarily. Which goes against the promises given by Russia, in confirming Ukraine’s borders. First in 1994 (signing the Belgrade Memorandum), and then in 1997 & 2010 (extending the Sebastapol Naval Port Lease).

Russia’s military action started in 2014 with “the little green men” taking over Crimea, and then forcing a vote to join Russia.

A proxy war started that same year, with some covert Russian assistance, in the eastern part of Ukraine.

Then in February 2022 Russia openly invades Ukraine on three fronts, whilst bombing everything from civilian air-raid shelters, to schools and hospitals. There are reports of all sorts of atrocities by the Russian troops, from rape, to torture, and murder.

Russia has departed from all the basic tenets of civilized behaviour.

Time for Canada to state that Russia is a criminal and terrorist state.