Came to Gananoque as it was “on the way”. Based on my neighbours, that is why most people stop here. They were heading to Ottawa, Montreal and Quebec City.

But there’s more to Gananoque.

Food wise……an apetizer of perogi with potato n sauerkraut. Now that is a first. And so logical, once you taste it. 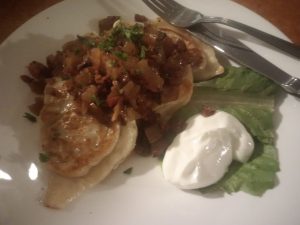 Really fresh schnitzel. Not paper thin, the way it should be. But so fresh and tasty, that you can forgive that. 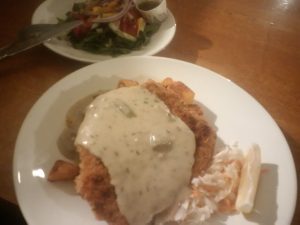 All at a Czech restaurant, called the Maple Leaf.

A saturday market, that runs from spring till Thanksgiving.

Near the central bridge is a brew-pub.

The town has an Old English pub with a proper beer pump. But just a tease. No real ale. Not even in the summer. Worse still. The pump has a sparkler fitted! The devil gets everywhere!

Two theatres.
One by the water, showing ‘Jersey Boys’ whilst I was in town.
Another on the main street, with an eclectic mix.

A funky cinema with paintball, party room n more. I saw the movie ‘Woman King‘ there. A good B-movie.

And the nice rides. I rode Hwy2 into Brockville for lunch at Boboli 😉 Great excuse to ride the 1000 Islands Parkway. Pretty any time. Awesome with the leaves turning from green to yellows and reds.

Gananoque.
Come for the stopover.
Stay for the above.